Wonkette has an article with some good snark about the neo-Confederates and their idols removed in New Orleans, and praise for Mayor Mitch Landrieu's speech.

I posted the below comment at Wonkette. It has not appeared, tagged "Detected as spam".  I'm not sure why. Maybe because it's a bit long.

Yeah, good speech by Mayor Mitch, though some of the locals who have been working for years, for decades, to make this happen are a bit annoyed with how it looks like Landrieu is trying to take all the credit.

Just a bit annoyed. As opposed to the neo-Confederates, who are jumping up and down like Yosemite Sam about to burst a blood vessel, swearing at that Satanic Commie Mitch, without whose treacherous troublemaking, everyone would have continued kowtowing to the Confederate slaver traitors idols forever.

Most of the shouty Confederate Treason Flag waivers were from out-ot-town, but there are a fair number of locals (especially of certain ages and complexions) who express shock (SHOCKED, I TELL YOU!) at hearing the notion, which apparently never crossed their minds to consider, that other folks in town have long considered "the monuments" objectionable. (MY STARS! I must fan myself!) It's pretty remarkable what some people can resist noticing -- even when it's been in front of their faces.

The so-called "Battle of Liberty Place Monument" put up in 1891 by the city's White League (yeah, they didn't try to disguise what they were about back then) said 'WHITE SUPREMACY" right on it in stone letters, so it was kinda hard to pretend it was about anything else. It was long recognized as the low-hanging turd of "the monuments". When Mitch's dad Moon Landrieu was mayor in the 1970s, it was moved during construction and Moon warehoused it hoping people would forget about it, but a group of families from the old White League made him put it back, because history, though he got them to add a rather timid plaque adding the footnote that not everyone in New Orleans agrees with that stuff any more. The next Mayor, Dutch Morial, unsuccessfully tried to get it taken down in 1981, but did get the to add a somewhat less timid footnote inscription. In 1989 under Mayor Sidney Barthelemy some more construction was another good excuse to move the thing to a warehouse again (hopefully to be lost forever due to some paperwork error) but a fight led by DAVID F'ing DUKE made them put it back up, though in a less conspicuous location and with some of the worst of the original inscriptions replaced with blander stuff. The 1993 re-dedication ceremony led by David Duke with lots of treason flags was on all the local tv news, and a big color photo of African-American state Representative Avery Alexander being pulled away in a choke hold by NOPD while Confederate flags waived in the background was on the front page above the fold of the Times-Picayune. Just some of what some people claim to have never noticed.

Whatever we might say about Jefferson Davis now, I think it would be hard to say any more eloquently than William Claypoole Johnson did in 1863, with his cartoon/poem "The House That Jeff Built".  Check it out. 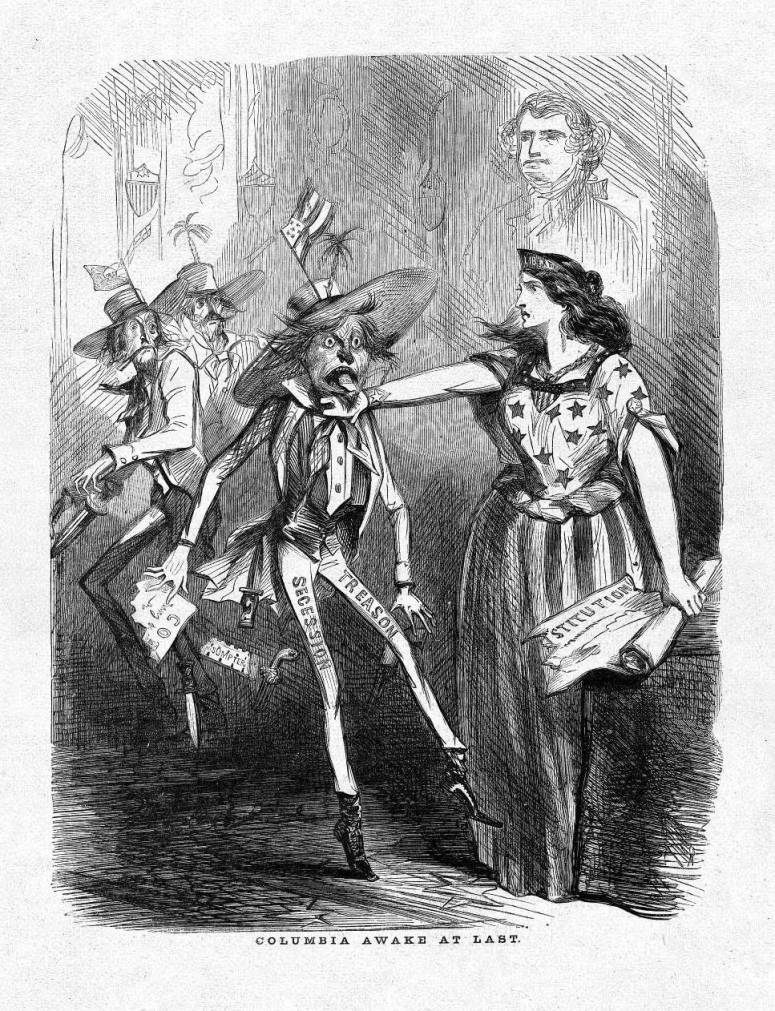 On 22 December 1963, on the one month anniversary of JFK's assassination, former President Harry Truman published and op-ed in the Washington Post about how he was “disturbed by the way CIA has been diverted from its original assignment” to keep the President promptly and fully informed and had become “an operational and at times policy-making arm of the government.” Truman's editorial only ran in the first printing of the Post before it was pulled. Good summary article on "Fifty Years of Struggle" blog, with copy of Truman's original article (click to enlarge).

On 22 November 1963, Gayle and Bill Newman with their sons Clayton and Bill Jr. went to see President Kennedy as the motorcade drove through Dallas. They became some of the closest witnesses to the assassination. 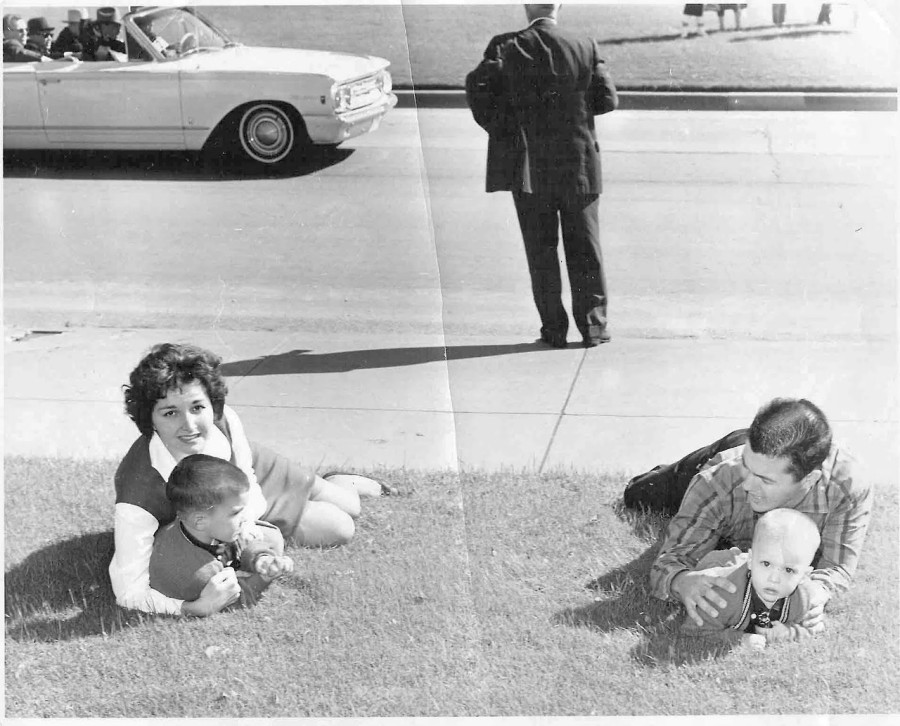 "We were just in front of the Triple Underpass on Elm Street and we were at the edge of the curb getting ready to wave at the President. [...] The President's car was some fifty feet still up infront of us coming towards me. There was a shot and the President, I don't know who was hit first, but the President jumped up in his seat and I thought it scared him, there was a firecracker, cause he looked, you know fear, and then, as the car got directly in front of us, well, a gunshot apparently from behind us hit the President side, side of the temple." -- Bill Newman

"We were standing next to the curb so the children could see the President. And the car was just up a piece from us. This shot fired out, and I thought it was a firecracker. And the President kind of raised up in his seat, and, uh, I though he was going along with a gag or something, and all of a sudden this next one popped, and Governor Connally grabbed his stomach and kind of layed over his side. And then another one, it was all so fast, and President Kennedy reached up, grabbed, looked like he grabbed his ear, and blood just started gushing out, and my husband said 'Quick, get down!' and I grabbed the baby and we ran and layed down on the grass and I got on top of him. It was just right by us when it all happened. -- Gayle Newman.

Usually in Presidential motorcades, a car or truck with press photographers rode right in front of the President’s limousine to take photos along the route. Somehow on this day in Dallas the press car wound up 8 cars behind the President’s. No doubt there’s some perfectly innocent reasonable explanation for that. Anyways. Some of the reporters jumped out when they got to where the assassination just took place, and seeing the Newmans on the ground covering their children, told them to stay put for a moment while they took their photos. 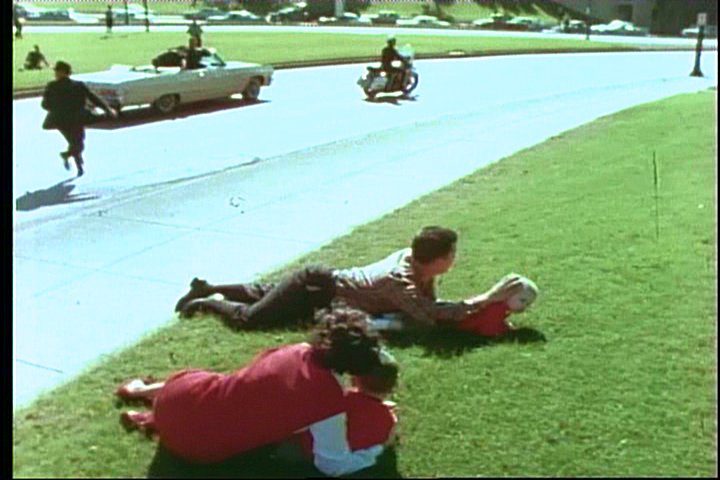 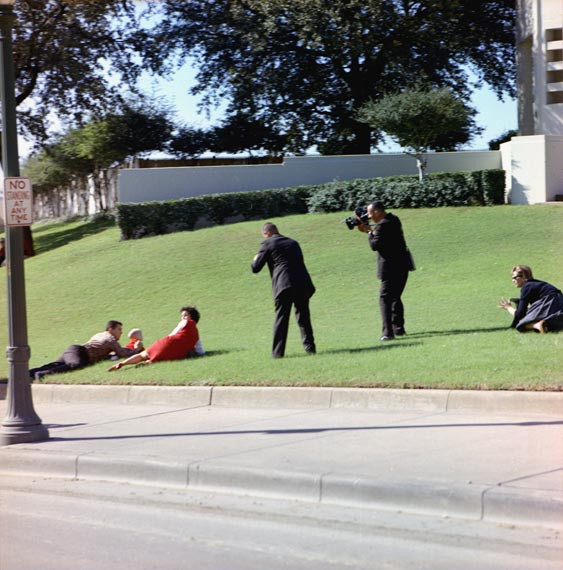 Jay Watson of WFAA radio & tv, per his own description, "commandeered a car" to bring the Newmans directly to the Channel 8 television studios. (Understand this was before the era of portable hand held television cameras.) A colleague was assigned to tell the studio to be ready to go live and to be sure to record it (not yet the usual practice). Within 20 minutes of the shooting, the Newmans were recounting what they saw on live television.


Oh, for anyone not familiar with Dealey Plaza, "behind" them where they thought the shots came from was the north knoll and pergola. The 6th floor of the Texas School Book Depository was to the left and in front of them. The Newmans were not interviewed by the Warren Commission.

JFK Assassination: CIA and New York Times are Still Lying to Us, by David Talbot, Salon

Surgeon in ER insists 2 gunmen shot JFK - Doctor first to see Kennedy's wound. By Michael A. Fuoco, Pittsburgh Post-Gazette Correction - Doctor doesn't "insist 2 gunmen shot JFK", but rather points to medical evidence that it was a minimum of 2 gunmen.

Bush and the JFK Hit, Part 8: Prepping a Patsy? By Russ Baker

"No laws define the limits of the N.S.A.'s power. No Congressional committee subjects the agency's budget to a systematic, informed and skeptical review. With unknown billions of Federal dollars, the agency purchases the most sophisticated communications and computer equipment in the world. But truly to comprehend the growing reach of this formidable organization, it is necessary to recall once again how the computers that power the N.S.A. are also gradually changing lives of Americans - the way they bank, obtain benefits from the Government and communicate with family and friends. Every day, in almost every area of culture and commerce, systems and procedures are being adopted by private companies and organizations as well as by the nation's security leaders that make it easier for the N.S.A. to dominate American society should it ever decide such action is necessary." -- David Burnham, New York Times, March 27, 1983

Photo sharing site Flickr did a massive redesign last month. Photos are now displayed larger - and unless viewed individually, lacking titles and captions. Various other changes as well, most of which result in the site being slower loading and harder navigate. Flickr is owned by Yahoo. I remember when Yahoo killed GeoCities; I wonder if Yahoo is in the process of doing the same to Flickr.

Since the redesign I've been laying back, accessing Flickr lots less than I had been, hoping that they'd realize their "New Coke" mistake and at least offer the option of users being able to view images according to the old functionality. Some other long term Flickr user friends and online acquaintances have been posting images and comments critical of the redesign, one with decades of photos is in the process of transferring them elsewhere, and several others are looking for other options.

Michael Stutz on HufPo: How Flickr Redesign Leaves Out the Photographers

The Online Photographer: A Better, Brighter Flickr(?) Some interesting comments.

Infinite Hollywood: The New Flickr Sucks and Here’s Why

Among the many negative Flickr forum threads: Redesign literally making some users sick

What BP Doesn’t Want You to Know About the 2010 Gulf Spill - The 2010 Gulf of Mexico oil spill was even worse than BP wanted us to know. Daily Beast article

Christian spent most of the 1920s with various bands in Europe.

Back home in New Orleans in his later years:

Johnny Wiggs band 1954: If Ever I Cease to Love (on Picosong) Playing an old New Orleans Mardi Gras standard, the band falls into an old mostly ensemble New Orleans style.