Your cyber-pal way down yonder in New Orleans

Yes, some people do call me "Froggy" In Real Life. 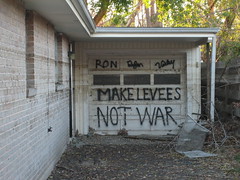 After over a month as a refugee from the disaster of Hurricane Katrina and the manmade aftermath, I'm back home in New Orleans.

"This economic pie that is getting ready to explode before our eyes is going to be shared equally." -- Mayor C. Ray Nagin. Mmmm, exploding pie!

I never did get my slice of exploding pie.

Infrogmation elsewhere on the web

LiveJournal says I'm interested in too many things, and I can't be interested in other things until I stop being interested in some current interests. With that in mind, here are spare interests I've removed for the time being to make room for new ones.